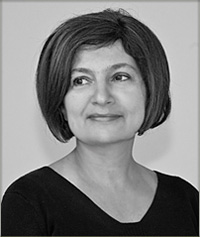 "I didn't choose art... art choose me", said a famous artist. This could very well apply to me, in the sense that I didn't choose Art as a career. However, though initially trained as a linguist and educator, as long as I can remember, I was mesmerized by objects of art. Yet as a teenager running around galleries, art museums and trendy and often underground exhibitions in Moscow, Russia (my place of birth), I could never have imagined that many years later in a far away country I would be making my first steps as an artist, a sculptor.

The path toward sculpture didn't happen as something planned or thought through. Rather, it was an escape from a personal tragedy, a way to release the agony and pain. Perhaps this is why stone, in combination with a hammer and a chisel, became my medium of choice. And then again, it may have in my genes, as my father had a dream of becoming an architect, yet was drafted to fight in World War II and never materialized his dream. I often think of him when I do my work and thank him for giving me his gift of inspiration and creativity. Creating a work of sculpture involves so many different stages - from inspiration to frustration to exhilaration, in no particular order. And yet, there is nothing else that gives me so much joy or fulfillment.

Contemporary abstract figures and shapes in stone - marble, alabaster, limestone, soapstone, have been the main focus of my work. Amedeo Modigliani and Henry Moore have been my guides and inspirations. Though I experimented with other media, such as papier-mache, clay/raku, it is working in stone that has been most gratifying. My earlier work was mostly abstract, yet the more recent focus has been abstract figurative sculpture, such as a series called "LE JARDIN DES FEMMES" (FEMALE GARDEN). These female figures extract various inner, often sensual, emotions translated into stone.

My most recent obsession with bronze casting came about as a result of a workshop given two years ago at the Sculpture Center by John Ranally of the Studio Foundry. Thus, the latest series - "URBAN RUSH" - are one-of-a-kind female figures in bronze, such as "On the Go", "Life Is... But a Dance", "Dancing Female" to name a few.

In the past several years I have been fortunate to be selected for numerous juried shows, have received awards in sculpture, was a featured artist. The highlight of last year, however, was an acquisition of my sculpture by the Putnam Sculpture Collection at Case. I have work in private collections in Ohio, Pennsylvania and Virginia. My sculptures are currently exhibited in the following galleries - "Opus" in Woodmere, "Fiori" in Little Italy, and "Duncan" in Hudson.