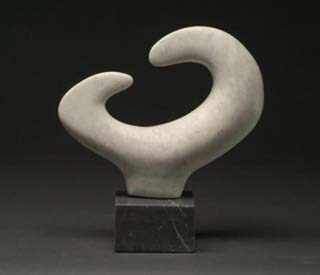 Although she exhibits her work in cities like Columbus and Washington, D.C., Kiderman considers Cleveland her main turf. "I am very much a local artist," she says. "A lot is happening for Cleveland in terms of art, especially in Collinwood, and I think it's very important to promote art here.

"Kiderman sculpts in several media including bronze and glass, but asserts that her first passion is stone. "I love the feeling of the danger that stone has," she says. "No mistakes are allowed."

Like Jeffreys's, Kiderman's art is primarily abstract. "I like to leave something for the viewer to imagine on his or her own, rather than to be representational," she says.Kiderman frequently sculpts female images, and she has also created a number of masculine warrior sculptures. The artist exhibited these seemingly disparate images in the show. "They seem very oppositional in a way," she says, "but to me they're not - there is a connection there."

A member of Anshe Chesed Fairmount Temple, Kiderman has been taking classes at the JCC's Jewish Learning Institute for three years, and she credits classes there with inspiring her spiritual growth, which is reflected in her work. One class discussion on Kabbalah even moved her to title a sculpture "Eve's Kiss."

Jewish perspective and tradition are Kiderman's muses in other ways as well. Growing up in Russia with grandparents who had traditional Jewish celebrations, and then immigrating to the United States in the 1970s, Kiderman has been able to be an observer of American culture. "I've embraced this new world," she says. "But because I have seen a different world, I have something I always compare things to."

As her latest project, Kiderman has begun a series of sculptures that will explore the different stages of human experience. She has already incorporated the mark of life's stages into her current pieces.

"What many of my figures have in common is that they have holes in them," she explains. The artist postulates that these openings in her figures demonstrate the tragedies and losses in human life.